If You’re Happy And You Know It

Or alternately, if you’re miserable and you know it – and it’s just no good at all…

Despite – he said, by way of explanation – the depressing fact that I have failed.

I am A Failure; one who has failed. That is What I Am.

It’s the last day of November. And despite my best intentions, I have failed to write a 50,000-word novel.

I gave it a good old Aussie go, though. Really, truly did!

But I didn’t write 50,000 words – and I didn’t finish it. And it’s dead now. It doesn’t want to be worked on any more. It has become a stinky moribund dead project that pains me and makes me annoyed at myself. And it’s bad when you annoy yourself.

Winces, girds loins, drives a stake through its beloved heart.

The silver lining is, I’m actually well pleased with the 37,566 words I did write. They came out great.

Which was really the problem. They were too good. Consequently, somewhere along the line, I forgot to not take myself seriously. Which is the whole big-thing point of NaNoWriMo. You can write a stupid 50,000 word novel in a month. But unless you are a bona fide literary genius, you can’t write a good one. Forget about it.

I’m tempted to quote Alanis Morrisette at this juncture. But for everyone’s sake, I shall abstain.

The point is: I’m, like, trying to be philosophical and shit. I feel pain now, but I know the venture was far from a dead loss. In the end, I got more out of it than I would have if I hadn’t undertaken it. And in any case, I’ve lost nothing. Just a ride. Etcetera.

In other shittiness news, nobody but a handful of stalwarts – it seems – can come to our party.

Again, I don’t feel too bad about it. It’s getting towards That Time Of Year; everybody has lots of prior engagements. A bunch of people came to the last one – and most if not all appeared to genuinely have a good time. So it’s not like this is a sign that all our friends secretly hate our guts, or think our parties suck.

Finally, congratulations are in order to Mr Tripto Deluxe, who jumped on board my NaNo bandwagon and then kicked my ass right off the damn thing by actually finishing his book.

Kudos to you, my friend. Kudos to you. No, I wouldn’t come to my party either. You have better things to do. Course you do. We’re not really going to kill you. That was totally, like, an empty threat. Course it was.

Excuse me, I have to be alone with my hands for a while.

Filed under Art, Benevolence, Damage Control, Failure, NaNoWriMo, People, Philosophica, Self Analysis, some do it fast, some do it better in smaller amounts, Weblogs

The novel is progressing well enough though.

Admittedly at this stage it seems like hitting 50,000 words by the end of the month will take a miracle. But they happen occasionally.

What’s actually troubling me more, stupidly enough, is that I still have no idea what to call the damn thing.

In other news, party at Chez Hagakure on December 2nd. Tell your friends. And if you have no friends.. hey, come alone. Maybe you’ll meet some.

Here is yet another picture of LJ:

Filed under NaNoWriMo, Nothing, Pictures Of Lady J

So, November Rolls Around Again

And, as previously advertised, I’m going to be spending much of it writing a 50,000 word novel. Wish me a broken leg. Heh.

I’m not sure how this will effect my blogging output; whether it’ll go completely dead, or through the roof, or stay basically the same, or grow into a (yet another) poignant and/or disturbing document of my progressive descent into total insanity, or what.

But I ‘spect we’ll find out! So yeah, I’m going to do NaNoWriMo this year. I’ve taken this decision now so I’ll have lots of time to prepare, and flagging it here so it’ll be harder to back out when November rolls around. 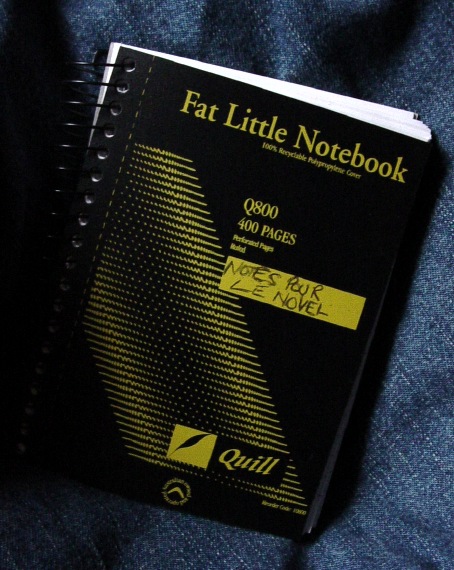 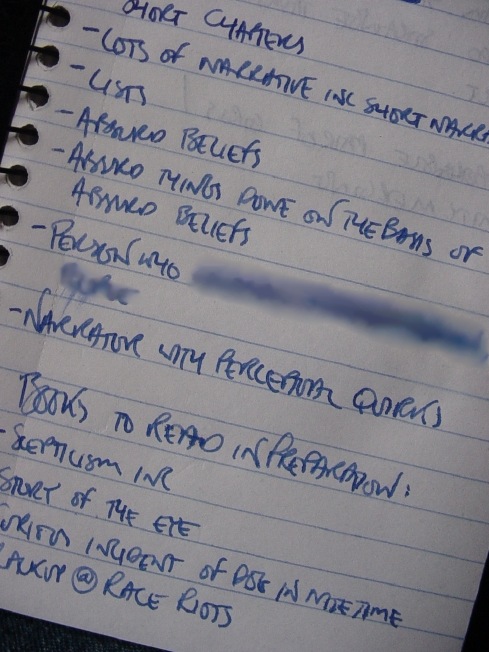 I bought this notebook to put thoughts and ideas in.

Because I’m a sucker, I’m going to acquire & read Chris Baty‘s NaNoWriMo bible No Plot? No Problem! I like the title.

Another preparatory project will be salvaging old writings dating back to the early 90s from my old Mac Classic II (pictured below), currently awaiting carriage to these people, who are going to put its 40MB hard disk onto a CD for me. 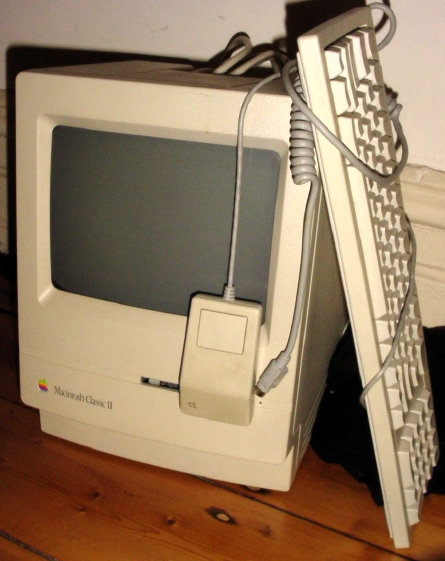