Here Is The Neuronews

Bridget Fischer, as all operatives were recently advised, has stood aside temporarily due to conflict of interest concerns.

Miles Carrefour and Gertrude Zelle have been suspended from duties pending an internal enquiry regarding “recent security breaches”.

The mail supposedly from Miles Carrefour posted recently on the Neuroboards is a “fabrication created by parties seeking to undermine Neurocam International”.

The Neurocam website has gone down because it “has been hacked and is no longer secure. We are currently working on a new encryption system to enable us to get back online as soon as possible. The timeframe on this is unclear at this stage.”

No one is receiving routine assignments. It is not known at this stage when they will start receiving them again. But they will. 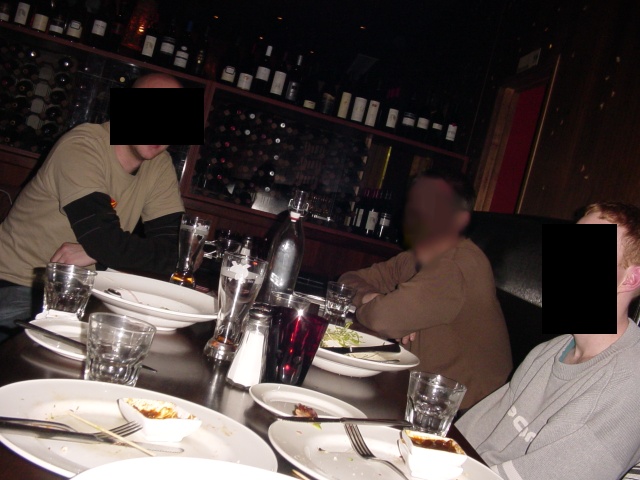 It was a success, I think. A somewhat disappointing seven operatives showed up in person – Cat was there proverbially, and Operative Jojo sent an apologetic text message or two – but these operatives were not in themselves at all disappointing.

One I had never met but knew online. Three I had previously participated in an assignment with. Of these, one had officiated at my book burning, one I knew online, and one was half of the pair of elusive and, of course, mysterious non-bloggers who emerged from their holes – which is always good. One had discovered quite an interesting thing. (dude – email me)

A detailed report will not be made since somewhat inevitably more was said than is entirely suitable for broadcasting. 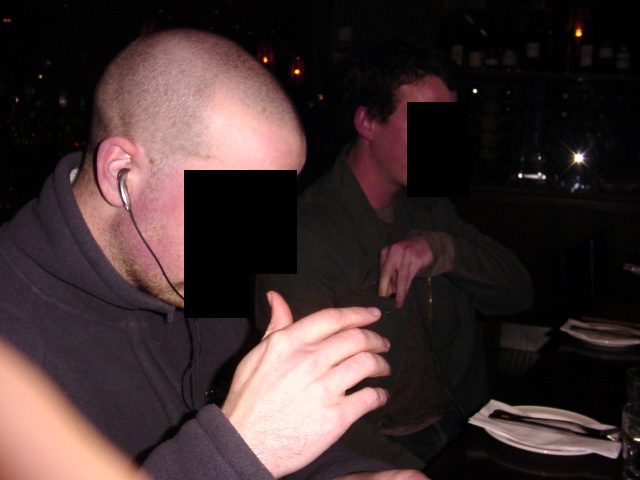 Operative “no pictures!” Reanimator and another non-blogging operative

Expect a William S. Burroughsesque audio cutup from Operative Reanimator shortly. Along with another interesting project or two.

An attempt at a collective audio blog post was made. It may require some work.

A good time was had by all.

I was a pussy and had to bail early.

Neurocam will be fine. 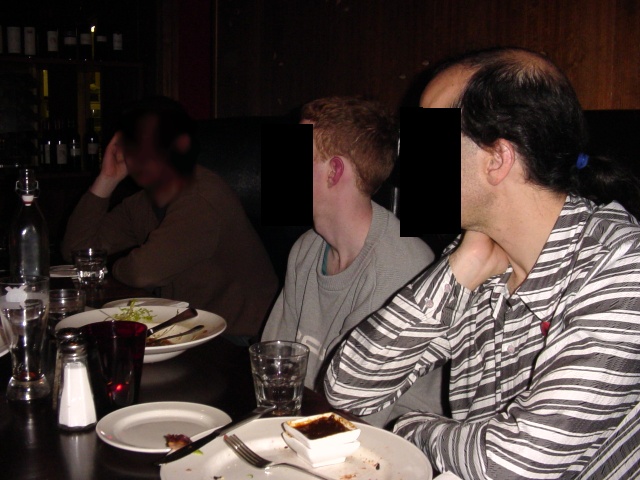 UPDATE – American Guy & Reanimator have reports which actually cover what we discussed to some extent, if you’re interested in that. A lot of Reanimator’s is made up, though…

2nd UPDATE – Rorschach and Li have also posted reports, Li’s being by far the most accurate.

(Then, after that – no, not directly after – Rorschach, Li, Reanimator and I are going goth clubbing.)

British Prime Minister Tony Blair says he is “desperately sorry” for the death of a Brazilian electrician shot dead by London police after being mistaken for a suicide bomber.

The commission investigating his death said Mr Menezes was shot at close range eight times, not five, as originally reported.

Prime Minister Tony Blair said he was “desperately sorry” for the shooting.

You can tell he really means it, too. He’s really, really sorry. He feels just terrible about it. It burns him up inside. It’s been keeping him awake at night. Honest.

Tony Blair: he means it, maaaan. He’s got that whole “I’m sincere, me” thing down. 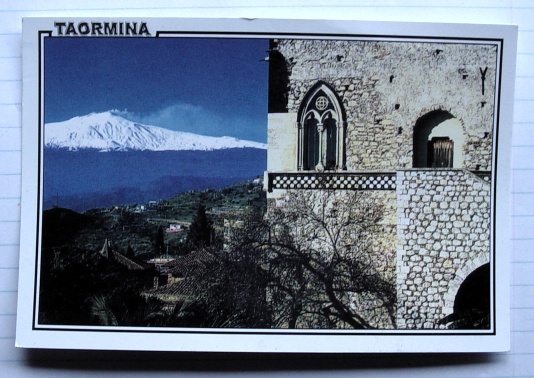 From my old friend Martha of Ireland, who is holidaying on the continent (Italy, to be exact). 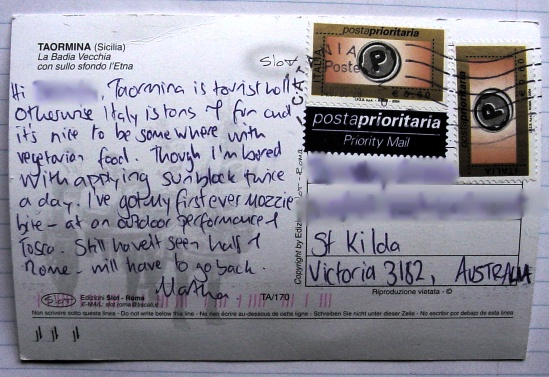 Not a suicide bomber at all.

I’ve just been on that IRC channel they’re always banging on about at the Neuroboards.

It was good. Adren and Kybalion were there. I talked to Midnight and Colin, who I have actually met. And I encountered someone else from Melbourne who was not an op, but who had inherited someone else’s Neurocam identifier.

All The Great Generals Were Keen On Seafood

On Thursday night I went to a double of Wong Kar Wai’s 2046 and, excitingly, Peter Greenaway‘s last great movie, The Cook, The Thief, His Wife & Her Lover at the Astor.

It was pretty fuckin’ good.

And I don’t care who knows it.

I cite him as a major influence.

“The other night I took an eighty-year-old taxidermied monkey, set it on fire in the pool and filmed it from beneath with an underwater camera,” says Marilyn Manson, sitting in his home in Los Angeles. “It was beautiful, like the Titanic, the Hindenburg and King Kong all mixed into one.”

Manson has come to a crossroads in his career. “I no longer want to make art that other people — particularly record companies — are turning into a product,” he says. “I just want to make art.” And he’s invented a new genre for his new breed of art: “horripilation.” “It’s horrifying, and it’s depilatory,” he explains. “It will horrify the hair off of your legs.”

First up is PHANTASMAGORIA: The Visions Of Lewis Carroll, a set of four short films to be released through his Web site. “It’s the visions of Lewis Caroll — in fact I’m playing Carroll,” he says. In Installment One, Manson explores the origin of Alice in Wonderland’s Tweedle Dee and Tweedle Dum. “I might add that the girls playing Tweedle Dee and Dum are twins who get to have real, genuine sex with each other. I like to make dreams come true.”

Manson is also opening an art gallery in L.A., publishing a book of paintings, planning to convert his basement wine cellar into an opium den (“I don’t drink wine”) and sporting a goatee for an upcoming cameo opposite Lucy Liu in Rise.

He’s also got eighteen songs in the can. “It’s not like I’m going to stop making music and start knitting,” he says. “I just don’t think the world is worth putting the music into right now. First we’re gonna fix the world with horripilation.”

Simon‘s Gone To A Lot Of Trouble

And I want to see him getting some comments, okay?!

Some of Ben’s many tattoos: 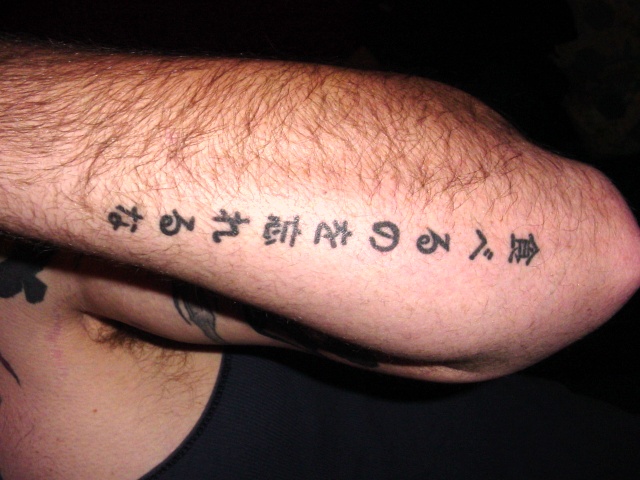 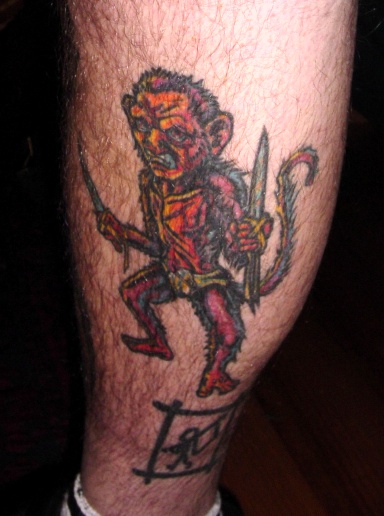 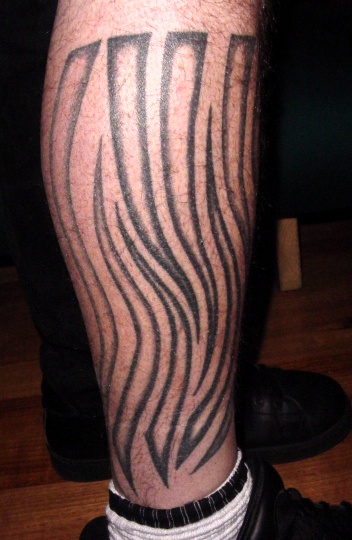 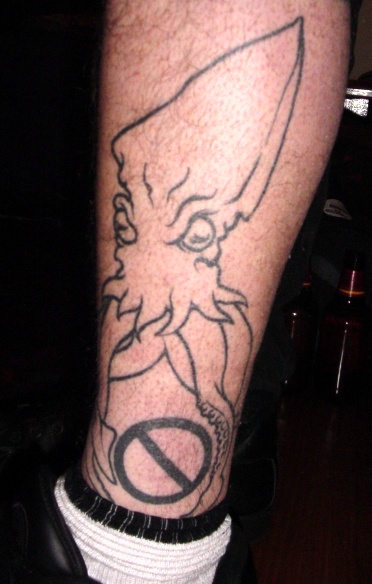 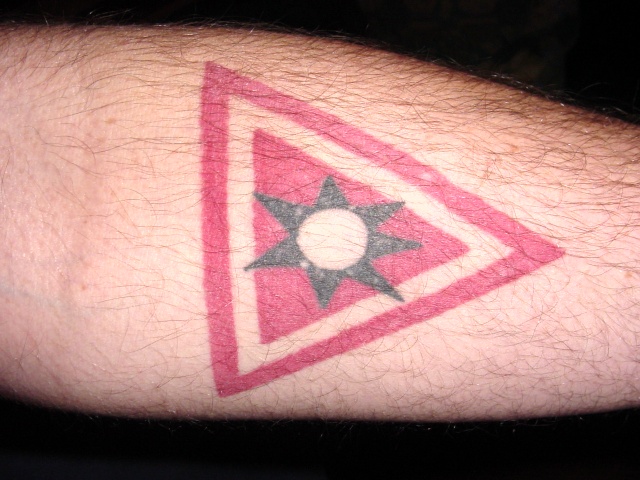 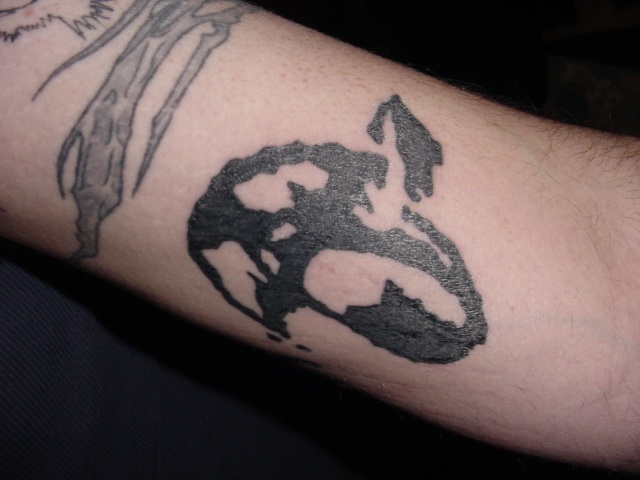 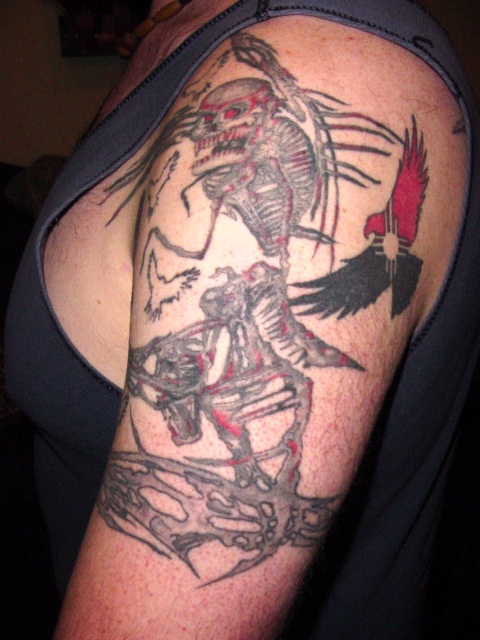 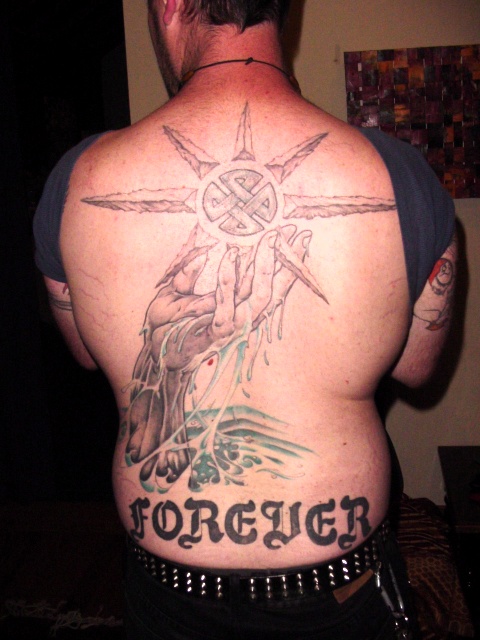 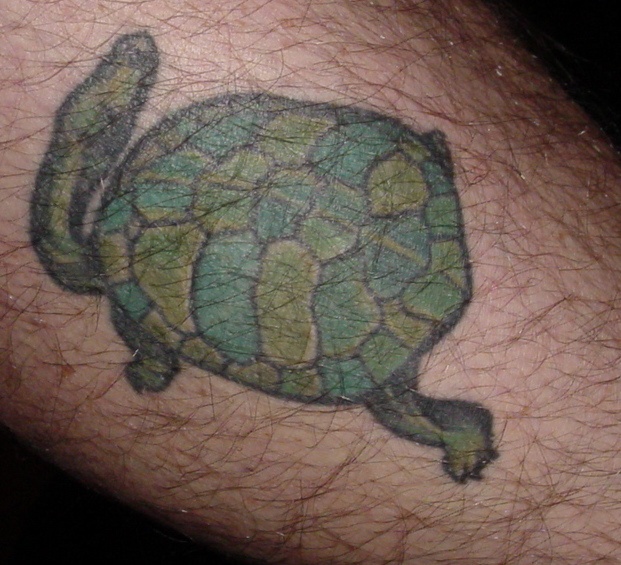 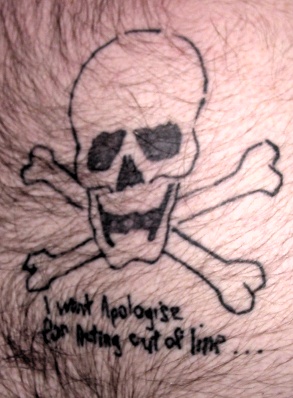 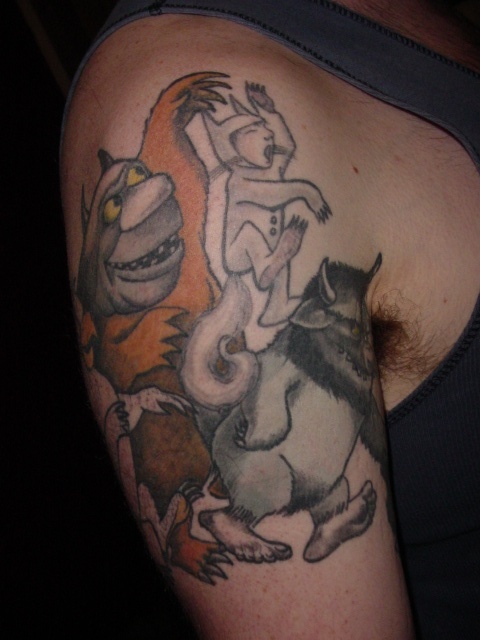 I am not moving Tript‘s link out of the Neurobloggers’ section in silent protest against his sad decision to give up the practice.

And I have added two, both from California: Dev of Neurowiki fame, and hitshermark, who is, weirdly, not actually an operative yet as far as I know. 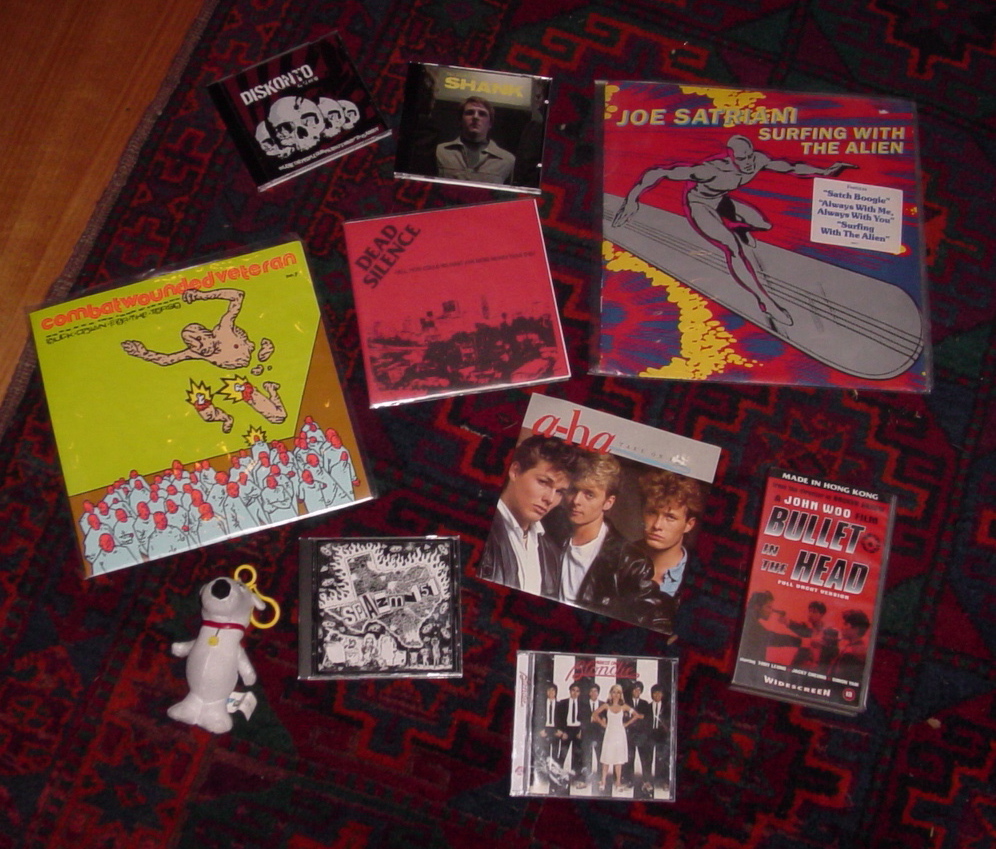 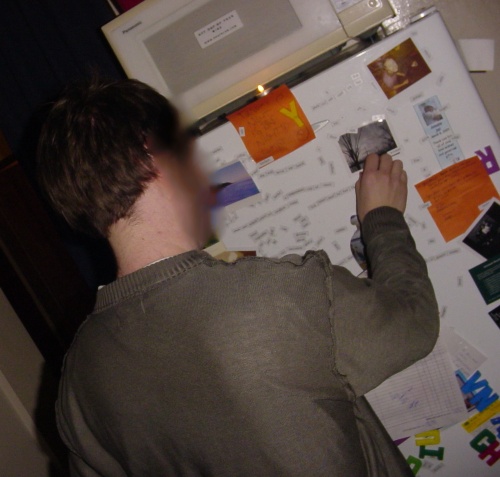 It’s really a shame about his face melting.