Didn’t really happen. But at least the tree looked pretty. 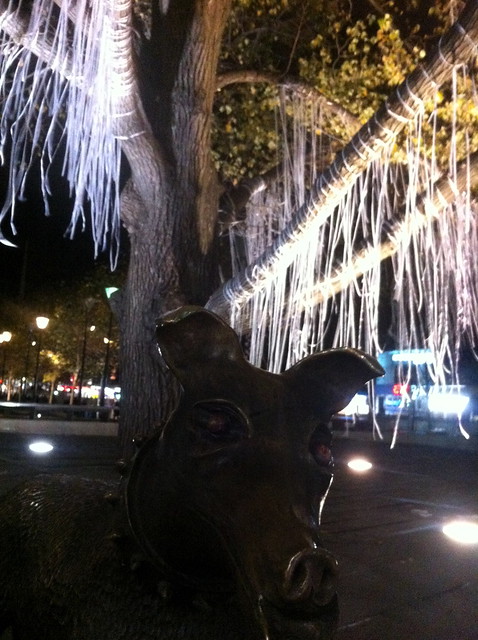 This all started when I received a call from Moo first thing in the morning advising that Channel 7 would be doing their evening news broadcast live from Federation Square, and suggesting that we quietly herd the cats for some snap TPPA-awareness-raising action.

Although in the end I personally missed the whole actual thing. Who knew it would turn out to be this epic? Wrong day to be taking a break. Oh well.

Filed under :), Awesomeness, Chaos, Desperation, Discombobulation, Failure, Here Is The News, Occupy, People, Television, These Hippies Are Not Messing Around, Video, YouTube This Month Has Been Totally Surreal

Semi was right. Victory for the Trysting Fields campaign.

Senator Amanda Vanstone says she will take some time to consider her future, after being dropped from the federal frontbench.

Senator Vanstone, who leaves the Immigration portfolio, says she is not sure if she will see out the five remaining years of her parliamentary term.

It’s unclear whether the subtext here is that she’s contemplating suicide. But if so, Mandy, know that you have my full support. You fat nasty bitch from hell.

(In other news: Is it just me or is Stan Grant looking, weirdly, much much blacker than he used to?)

If You’re Happy And You Know It

Or alternately, if you’re miserable and you know it – and it’s just no good at all…

Despite – he said, by way of explanation – the depressing fact that I have failed.

I am A Failure; one who has failed. That is What I Am.

It’s the last day of November. And despite my best intentions, I have failed to write a 50,000-word novel.

I gave it a good old Aussie go, though. Really, truly did!

But I didn’t write 50,000 words – and I didn’t finish it. And it’s dead now. It doesn’t want to be worked on any more. It has become a stinky moribund dead project that pains me and makes me annoyed at myself. And it’s bad when you annoy yourself.

Winces, girds loins, drives a stake through its beloved heart.

The silver lining is, I’m actually well pleased with the 37,566 words I did write. They came out great.

Which was really the problem. They were too good. Consequently, somewhere along the line, I forgot to not take myself seriously. Which is the whole big-thing point of NaNoWriMo. You can write a stupid 50,000 word novel in a month. But unless you are a bona fide literary genius, you can’t write a good one. Forget about it.

I’m tempted to quote Alanis Morrisette at this juncture. But for everyone’s sake, I shall abstain.

The point is: I’m, like, trying to be philosophical and shit. I feel pain now, but I know the venture was far from a dead loss. In the end, I got more out of it than I would have if I hadn’t undertaken it. And in any case, I’ve lost nothing. Just a ride. Etcetera.

In other shittiness news, nobody but a handful of stalwarts – it seems – can come to our party.

Again, I don’t feel too bad about it. It’s getting towards That Time Of Year; everybody has lots of prior engagements. A bunch of people came to the last one – and most if not all appeared to genuinely have a good time. So it’s not like this is a sign that all our friends secretly hate our guts, or think our parties suck.

Finally, congratulations are in order to Mr Tripto Deluxe, who jumped on board my NaNo bandwagon and then kicked my ass right off the damn thing by actually finishing his book.

Kudos to you, my friend. Kudos to you. No, I wouldn’t come to my party either. You have better things to do. Course you do. We’re not really going to kill you. That was totally, like, an empty threat. Course it was.

Excuse me, I have to be alone with my hands for a while.

Filed under Art, Benevolence, Damage Control, Failure, NaNoWriMo, People, Philosophica, Self Analysis, some do it fast, some do it better in smaller amounts, Weblogs