I often feel like I’ve been struck by lightning.

I want to watch Peter Greenaway‘s 1980 short Act of God again. It’s a documentary comprising a series of interviews with lightning strike victims. Lightning strike is recognisable as a phenomenon comparable to the mysterious Violent Unknown Event at the centre of Greenaway’s subsequent feature debut The Falls.

I originally saw both films about ten years ago, deep in the bowels of the National Library, where you could watch 16mm prints from the enormous film collection that they used to hold (which I believe now lives at Screensound) on quaint old Steenbeck viewing tables.

I was completely and totally obsessively in love with Greenaway’s work throughout my teenage years. It was the centre of my whole world. I want to get reaquainted with it.

I still possess dodgy VHS recordings (mostly taped off Eat Carpet over the years) of a number of his early shorts (H Is For House, Water Wrackets, Windows, Dear Phone and A Walk Through H), but not Act of God. And I’ve still never even seen Vertical Features Remake.

I really need to get these two DVDs.

I rescued these two books about PG from my parents sinking ship of a house: 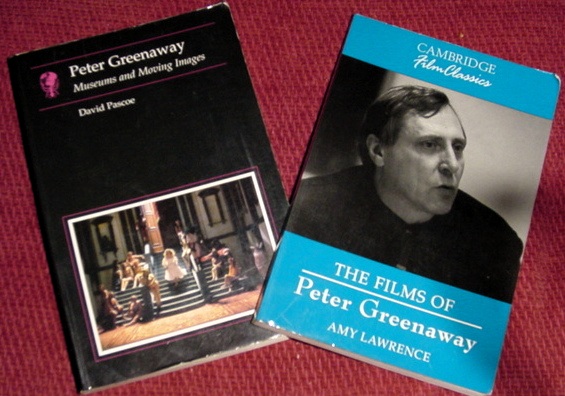 If I ever finish The Magus (I’m not going to give up on it now, but like others I’ve found it a tad bromidic) I’m going to read at least the Lawrence one again.*

And if I ever resolve my current deeply unsatisfactory employment situation, I’m going to celebrate by buying this DVD edition of A Zed & Two Noughts that I discovered at Chronicles on Fitzroy Street the other day, which features a director’s commentary track. My sixteen-year-old self would probably have keeled over dead with sheer excitement at such a prospect.

*Sidebar watchers will have noticed that I’m also currently reading Scepticism Inc by Bo Fowler – at work, since The Magus is a bit too bulky to fit comfortably in my pocket. It’s narrated by a sentient shopping trolley. It’s about a man who runs a metaphysical betting shop, which makes a killing because – metaphysical propositions being inherently unverifiable – it never ever has to pay out. These are just two of many great things about it.