So, at approximately 7:50 this evening, a white stretch limo pulled up outside the Belgian Beer Cafe on Moubray Street, Prahran, where two other operatives (one blogging, one not) and myself were waiting as instructed.

The driver ushered us inside. Two masked, silent Neurocam personnel sat at either end of a long seat facing a bar. The limo pulled out and we were each handed several documents (including two copies of a hefty engagement contract), a pen, and a set of headphones.

A laptop (one of those adorable baby powerbooks) had been placed on the bar, and instructions were delivered to us through it by way of a video address by a masked woman. Once she had finished speaking, an onscreen timer counted down the ten minutes we were given in which to examine the documents and complete certain tasks pertaining to them, which we did before being returned to our departure point.

Upon alighting from the limo we were each presented with an enigmatic souvenir. 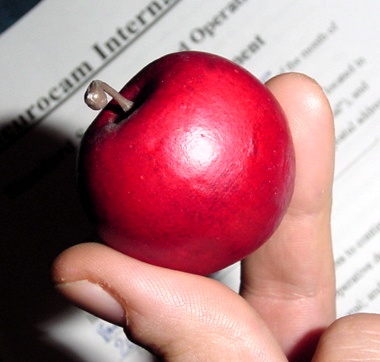 We then proceeded into the Belgian Beer Cafe and had a drink.